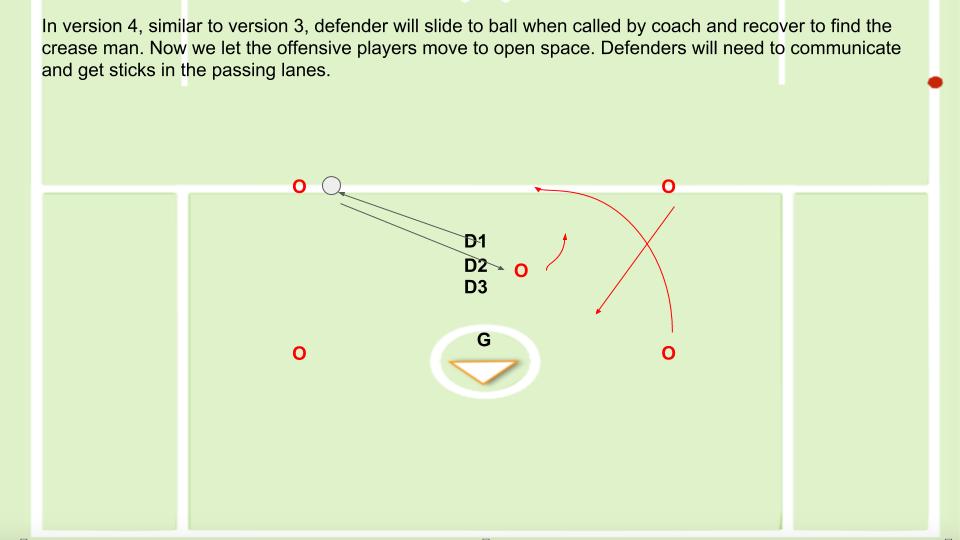 As coaches we often work hard on a defined slide package, or multiple slide packages in our lacrosse drills. Maybe you are a crease slide guy, or a coma slide guy, or even an adjacent slide guy. But in real life, in the flurry of a game, sometimes the definition of the slide can be taken by a different player, or in the confusion, even two players. So in addition to working on the slide, this lacrosse drill really emphasizes the slide and the recovery. I love it.

We are going to describe a number of variations and progressions of the lacrosse drill. I recommend you start with one or two for a week and then build. Do not throw three or four versions at your kids all at once, these are teaching and coaching moments.

The basic rules for the offense:

Move the ball, keep spacing, and score. Although the offensive players can move the ball, either up and down the alleys, or across the formation, or even skip passes, the offensive players can only shoot off a pass across the crease or a skip pass. In the first version of the drill we want them to not cut or drive as much as pass the ball quickly.

The basic rules for the defense:

The defense will have to come out and slide to the ball and recover. However, the coach calls out a number from one to three, and the designated player with that number is the player who must make the slide and recover. And the coach calls a different number on each pass. So on the first pass, the coach calls out “number one!” The assigned defender goes out to the ball under control. Immediately on the next pass regardless of where the offensive players throw it, the coach calls out a different number, for example “three!” and the assigned player slides aggressively to the ball. And the defender assigned to number ‘one’ recovers to the inside hole, stick to the inside and in the passing lane, and his head up often looking not the crease, but looking ‘away’ to see the next most dangerous offensive threat.

Remember, we want the offense to score, but only off of a skip pass, or a look across the crease. Have a blast with it, and keep it moving, and you call a different number on each pass.

In this version of the drill, the basics remain the same. But Coach Garber now adds a line of defenders behind two or even all of the four offensive lines. When a defender comes out on a slide because the coach has called his number, he continues out of the play. A new defender now must enter the drill, in rapid recovery mode, and carry the same number.

For example on the first pass, the coach yells out “number two!” and pass goes to the top right. The defender assigned number two, comes sprinting out of the stack, but when he approaches the offensive player, he does not turn and recover, but run past the player, and he is out of the drill. From a new line of defenders, a new player enters the drill, getting back into the whole in recovery mode, and he is number two. It may be on the next pass the coach calls out “number two!” and he is the new slide guy.

In this version, we are going to add an offensive player to the crease. We still keep just the three defenders stacked up, but now we have a new twist. Now the players in quick recovery after a slide are not only defending a skip pass, or a pass across the crease, but they need to identify the location of the crease guy, and cover.

As a coaching tip, we do want to make it easy on the defense, after all this is game simulation. Keep the Crease player moving his feet.

Version Four, One In, One Out and One Over…

In this version of the drill, all the basics stay the same, however we are now going to incorporate two or three players moving into the offense. It might be your basic motion out of three offensive players. It may be a cutter into the crease, the adjacent player filling his spot up top, and the previous crease guy coming up top on the other side to maintain spacing and a balanced offensive look on the field and so on…

Again, these last two versions we recommend adding after you have allowed your players to get familiar with the basics of the drill. Keep it moving, and encourage the kids to have a blast!!